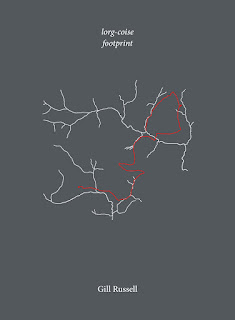 In March 2014, Gill started a residency with Deveron Arts exploring and walking the Hielan' Ways area: A large expanse of land between the Aberdeenshire / Moray heartland in the north and the Cairngorm mountains in the south, encompassing the Ladder Hills.

The area is dominated by shooting estates, including the Cabrach and Glenbuchat. Although largely unexplored as a destination for outdoor pursuits, it contains areas of hidden beauty and stark wilderness, traversed by a web of ancient footpaths and tracks: the footprints of generations of walkers.

Gill made 'footprints' in the Hielan’ Ways area. She explored by the practice of ‘lorg-coise’(Gaelic), the finding of foot – that is, by walking widely, and often slowly, throughout the area, identifying sites or landforms of significance.

From these explorations she created a blog and book of fourteen thematic map-drawings of walking routes with texts: lorg-coise.

Some of the walks she created adopt old paths; others follow no paths, travelling instead by burns, or features in the land – some visible, others hidden. Some of the walks may be more ideas than they are routes. She did not always stick to the routes myself – some she walked part of, others she travelled back to front. What they share is that they are all invitations, not prescriptions.

lorg-coise was published by Deveron Arts in Nov 2014 along with Alec Finlay's book- Some Colour Trends. The books and maps were designed in collaboration with StudioLR.They were launched at the Hielan Ways Symposium 14/15 November 2014 in Tomintoul. A pdf of the lorg coise can be downloaded HERE.

Gill also hosted a gathering of local heritage enthusiasts:  from Glenlivet, Glenbuchat, the Cabrach, Rhynie, and Tarland who have a specific knowledge or interest in the Hielan' Ways area. The wonderful Rhynie Woman collective provided locally sourced and foraged food.

Participants discussed the evolution of land use in the area (from shielings to shooting butts), local myths and mythology, long lost traditions and unusual rituals, the makeup of the landscape and its effect on those who inhabit it, walking and transport, unexplainable occurrences,  deed bodies, and the communities who used to live there. Alec Finlay and poet David Wheatley came along too, providing some interesting insights into local Gaelic names, with some of their poems about the area. 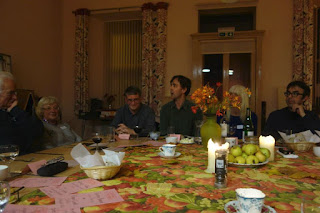