A community project run by Gill Russell and Alan Carr took place in Glenbuchat on 12 Dec 2012 at 12 seconds past 12 min past 12 noon. 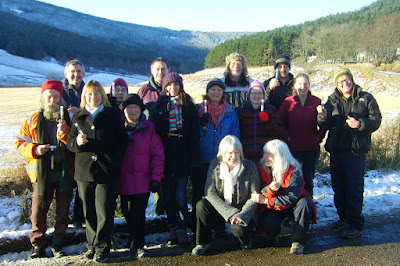 The river symbolises both linear time and cyclical time. In one sense there is no beginning or end, just a recycling through cloud. In another its linear as that ‘bit’ of river will never be the same as the moment passes.

Our lives are dominated by linear time , we measure every second of it and live our lives by it. But the notion that time is linear has not always prevailed. E.g. In the Celtic belief system , all generations were perceived to be in contact and it was not until 18th century that the notion of linear time became important. Before that time was thought of as cyclical, not linear. Their gods, goddesses and their ancestors belonged to not to heaven, but to the ‘Otherworld’ below, which was very much part of this globe.. The Otherworld went on at the same time, and could be glimpsed at liminal times when there was a transparency between worlds, and through the orifaces in our world wildernes, springs, mounds, rivers, wells  and trees with their roots in the otherworld. The naming of the first son after the grandfather ensured the ‘recycling ‘ of the dead. Our ancestors transcended the boundaries of time.

A community art project to celebrate the autumn equinox on Sept 22, 2012. 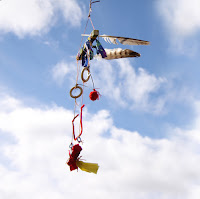 A giant installation of more than 100 individual colourful wind mobiles was created and hung over the Water of Buchat, with a personal wish for the coming winter attached to each one. A celebration took place, with drums, bells and poetry readings. A straw salmon was placed in the river, marking the equinox and the passage of time into winter as it floated down the river.

Gill created a book 'Equinox in the Buchat' as  a legacy of the project, with photographs by Alan Carr, Isobel Gilchrist and Peter Duffus.  A PDF can be downloaded here. 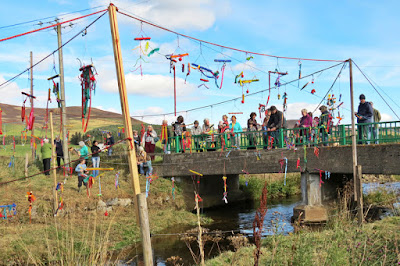 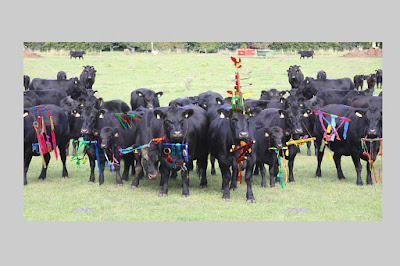