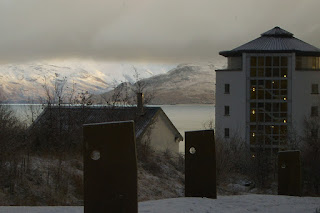 Gill was resident at Sabhal Mòr Ostaig part time for almost 18 moths over 2009/10. She spent a lot of research time deepening connections with the Gaelic culture and language and exploring connection between that and the landscape.

In addition to creating artworks, Gill gave several talks, organised open days and had many informal visits / discussions with staff and students at the College. She attended gaelic classes and improved her gaelic language skills. With her piece ‘Long Wave’, she was one of the artists selected for SCALE , the Clan Donald sculpture trail . She attended two ‘Windows to the West ‘ conferences .