'The Maighdean Mhonaidh , maiden of the mountain , a spring in Glen Derry ' which Alec  translated as 'The Lassie on the Hill.

Alec and I thought we could to link these by a walk. First I had to find them.

I never feel optimistic I am going to find the names expressing a reality in the landscape- something to do with an expectation it will keep its secrets.

The map showed little in terms of water features for around the grid reference for The Maiden .It was a long walk into upper Glen Derry on a hot day and I was a bit dubious we would find anything, but it seemed an important one to find. As I approached the site, to my surprise there was a sign of moisture - a small patch of dried up green slime on the path. It was barely noticeable but I followed the fall line directly up for about a hundred meters and there she was- The Lassie on the Hill , gushing out of the mountain! There was no doubt. It was a very exciting find , especially as my pessimism had got the better of me earlier.

The same pessimism set in on another hot day a year later, when I set out to find springs on top of Carn Sùilean Dubha. Springs usually start a bit lower down the hill. On the ridge out of the haze there was 'the puddle' I had seen on the map-the first sign of water. But as I got closer 'the puddle' turned out to be a  dry boulder patch, although there was a pool of standing water next to it. I was looking around for green rushes, moss, a sign of vegetation supporting water but I could only see heather. It felt odd looking for a spring on the top of a ridge. But when I descended just a wee bit, I saw the green rushes I was looking for and there was the first an 'eye' -unmistakable black slit in the hill with green moss surround. I then followed the contour line round , seeing more and more 'eyes' . The same to the North of the ridge. 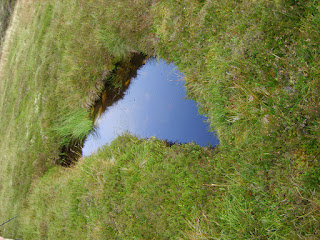 Looking down the glen out of the haze, I saw the glint of two more ' eyes' far away in Coire Suilean Dhuba /Allt Suilean Dhuba winking in the changing light.

It was thrilling that the name had become ' real' . It brought back the elation I had felt last year on finding the Maiden.