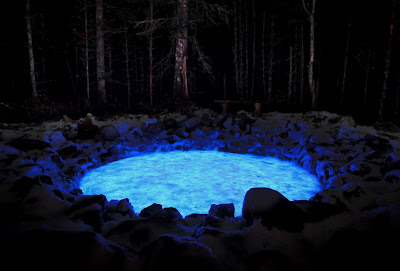 Sòrn explored the connections between worlds, time, land and sky. The artwork comprised a subtle circle of light in a low mound of stones set in a remote clearing deep in the forest. Surround audio from speakers in the trees created a soundscape in all directions.

Sòrn made reference to the winter solstice and the returning sun through the circle of dim light. The cairn of stones represented a meeting place, a memorial, a marker. It was reminiscent of the structures built by our early ancestors who had a keen awareness of the movements of celestial bodies and of a transparency between this world and another.

A collage of sound appeared to come from high in the trees around the clearing: voices, Gaelic song  , bells, chimes,  birds, animals, rain, water and wind. Gill worked with young people at Fèisean a’ Mhonaidh Ruaidh to record some of the audio material.

The name Sòrn  is a loosely translated from the Gaelic, means ‘hearth’ or ‘chimney’. In this context it describes a sort of transformative or liminal meeting place.

Sòrn was designed to be seen in total darkness  and was reached by a 5 minute walk along a forestry track from the Wolftrax Centre, Laggan. It was opened on the winter solstice 2011 with a lantern parade to the site and a performance of gaelic song.