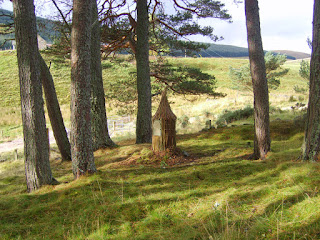 Talla an t-Sìthein was a night time sound and light installation inspired by the myths and lore of  the Gaelic 'Otherworld'. It was set in a very dark remote  patch of Scots pine trees.


Opening the miniture door of the Talla during night time hours revealed an inner world bathed in blue light. The audio soundscape  was created from a mixture of  voice, slowed down birdsong and harp playing itself in the wind.