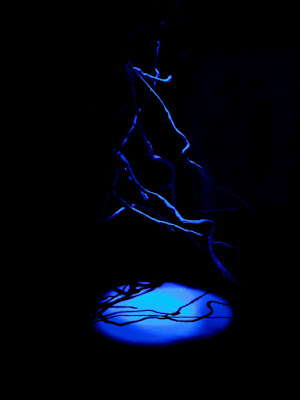 Uamh, inspired by the High Pasture Cave or  Uamh an Ard Achadh was one of the installations created during Gill's residency at Sabhal Mor Ostaig in Skye.  The audio originates from sets of recordings Gill and fellow artist Norman Shaw made with musicologist John Purser. These took place deep inside the High Pasture Cave stream passage where John played various ancient instruments such as bronze horns /bone flutes and performed harmonic singing.


‘Uamh an Ard Achadh’ The underground natural limestone cave with its main chamber ‘bone passage’ and underground stream passage has been used since Mesolithic times. During the latter part of the Bronze Age and the following Iron Age it appears to have been used as a religious and/or votive site, with many of the finds being associated with the female side of life and tempting a connection to be drawn with a revered female deity, perhaps the Celtic Earth Goddess Brigid. The entrance to the cave may have provided access to the ‘Otherworld’, a liminal place in the landscape where people held special feasts, and made offerings to Celtic deities.