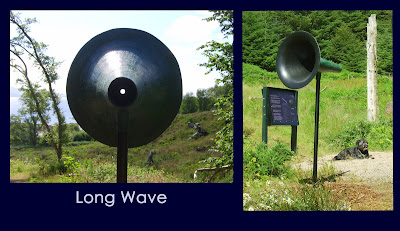 We live in the Milky Way Galaxy where our closest star the Sun is only one of over 100 billion stars.At the Galactic Centre there is a supermassive black hole.

The stars are so far away that the light we see from them traveling at 186,000 miles/sec takes years or even thousands of years to cross the vast distances in space to reach our eyes. So when we look at the stars we are seeing them as they were back in time.

And if a spacecraft could travel at the speed of light it would be at the Moon in less than 2 seconds the Sun in 8 minutes ….but at the closest star only in over 4 years. And it would be another 26,000 years before it would be at our Galactic Centre.

We cannot see the center of our Galaxy with the naked eye as at 26 thousand light years distant it is too far away. But it rises once above the southern horizon for a short time every 24 hrs and crosses the field of view of the horn at the times shown on the board.

Looking through the horn you can’t actually see it but you know at those times that this supermassive black hole at our Galactic Centre is briefly there….. detectable by powerful telescopes in the light that left it 26,000 years ago.

So Imagine there was ‘someone’ at the Galactic Centre and they were looking through a powerful detection system at the Earth’ now’….

Around that time the Neanderthals were dying out. In the grip of an Ice Age, Skye was not an island ….. massive creeping tongues of ice from the growing ice sheet were already advancing through the /valleys/glens and troughs now occupied by Loch Morar and Loch Nevis…..high up the flanks of the Knoydart mountains… over the Sound of Sleat ..to ultimately envelop the ground you are standing on beneath a 700m thick ice sheet