We walk on towards Footdee where Gill has arranged for us to visit Dales Engineering to see an oil supply vessel being repaired in dry dock. The experience is thrilling, the utter strangeness of an industrial environment, our host Richard Scaife’s graciousness, descending the 6 metres to the floor of the dock down rusted metal stairs to stand under the huge metal hull, whale-shaped and whale sized, a tower of scarred and sturdy metal which must have made its way through the depths of Earth’s every ocean. 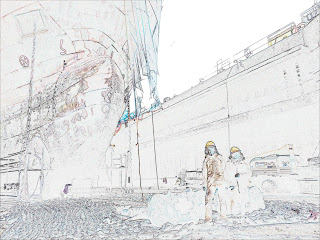 We are so small standing beside it and I wonder where, in relation to it, we might be placed on a scale of living things. Somewhere it’s clear, between cetacean and krill. There’s a vibrant air both contemporary and ancient at Dales, a sense of the confident continuation of the skills and traditions of this most venerable of occupations, the repair of ships.

After our visit, ships and whales sail and swim unbidden into my thoughts and dreams as I remember that during the 18th and part of the 19th centuries, the centre for the rendering of whale blubber for oil lamps was a short walk from where Dales is now, as I see again the list I found of the names of North East whaling ships and their fates: ’wrecked’, ‘lost’, ‘crushed in ice’. I’ll think of superstitions and traditions of the sea, the taboos, propitiations, the words which might never be mentioned, the rational
and irrational, the inescapable, justified fears. 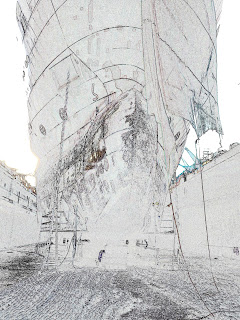 The life of any maritime city is a reflection of terrestrial and marine, stone and water, of the visible and the invisible too perhaps. Here, the past’s stamped in topography and stone, each incarnation eclipsing the last, port city, merchant city, whaling city, fishing city, oil city, a history in legends, stories, myths, the songs of the terrible dangers of the sea. 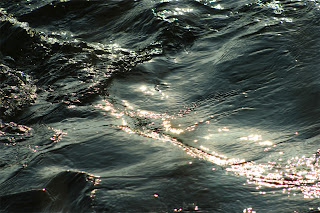 'Seafaring was surrounded by fears and forebodings-the element of mystery was strong.

In some villages on the East Coast of Aberdeenshire fisherman regarded it as most unlucky if they met anyone named Whyte on their way to their boats. They were sure their lines would be lost, or that very little fish would be caught.
There were so many human beings and animals that had to be given a wide berth by the fisherman making his way to the harbour or beach for his boat. First of all there were men and woman with unlucky names. Next came people with red hair or flat feet, but in this case their evil influence could be averted if one was quick enough to speak to them first.
Dogs were looked on as ‘ill- fitted’ but to encounter a hare or a rabbit was much worse. If a fisherman should meet a minister on his way to the boat, that was more than enough to cause the whole crew to remain ashore for the day...Extracts from Fisher Folklore, Peter H Anson, Faith Press, 1965

Extracts from Notes on a Collaboration,  A Narrow Glimpse of Sea, Esther Woolfson, 2022