Hundreds of ships were wrecked around the coasts of the western isles to the sea and weather, war, or navigational error. 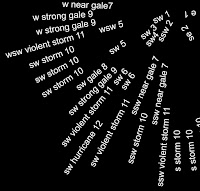 I listened to the stories from Tobar an Dualchais and read first hand accounts of shipwrecks in Mary Laing’s dissertation on Heisker. Catherine Laing told me a story of a man she knew, who had stood out on the headland at Tigh a’ Ghearraidh, North Uist watching a ship floundering in the sleet and gales with her sails torn. The day we visited that same headland it was stormy. We walked to the point where the man had watched from, and it was easy to imagine.
Iolaire
‘Sheòl an Iolaire/The Iolaire Sailed’ is Stornoway Port Authority’s dramatic, visual tribute to the Iolaire, whose sinking was one of the worst maritime disasters in United Kingdom waters.
On New Year's morning 1919 while carrying nearly three hundred naval men home on leave to Lewis, HMS Iolaire struck the Beasts of Holm, rocks within a mile of Stornoway harbour. Over two hundred died, most of them from Ness and the West Side of Lewis

HMY Iolaire-Centenary Art Installation (Sheol nan Iolaire)
© Scottish War Memorials Project
The end of the war was greeted with joy and relief by families and friends of the soldiers and sailors of many nations. For the islanders of the Outer Hebrides the many tragedies of the war were to have one last cruel twist as the survivors of the conflict made their way back to their island homes. (Scottish Shipwrecks)

wreck of the Iolaire

I trawled through the maritime archaeological archives from Canmore mapping, absorbed by the detailed records of events: loss of life and cargo, weather conditions, accidents. The immense journeys some of these ships made a hundred or so years ago, crossing oceans to other continents, and coming to grief on the Islands. Some of it was terrifying. I love the sea environment but I am scared of its power. I have always felt uncomfortable on small boats. 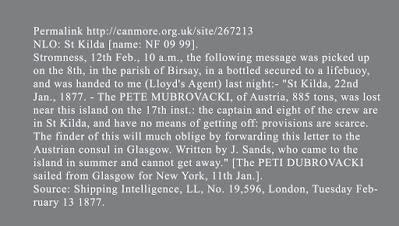 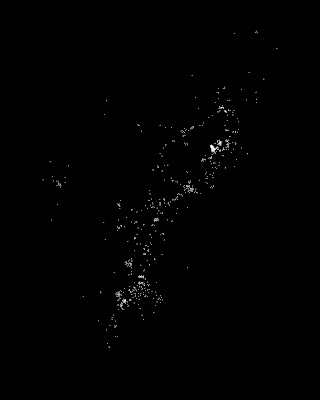 her sails torn and tattered

lying on her side

and drove her through

the sound of Monach

to the sands of Baleshare

in dense fog she struck

and was holed on the Uisgeir reef

at daybreak a heavy sea breaking

struck heavily on a rock

in the sound of Monach

during a gale in the night

struck by a huge wave

in rough weather off Barra

off the Butt of Lewis

off the port bow

The wind direction and force reported in the records of incidents
There are stories of happy salvaging too: The whisky dislodged by the Van Stabel on Heisker was consumed by locals; Potatoes saved from the Inflexible wrecked on Sgeir Mhor Shivinish in 1894 were grown until the 1970s and named 'Buntata Bowman' after the captain. 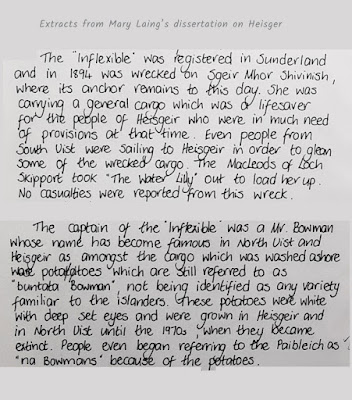 Many notable wrecks happened in the vicinity of Heisker (Monach Islands).

The story of the Van Stabel was told by Alastair Laing.

I made a map of Heisker using Mary Laing’s research into oral history, where she identified place-names that had not been recorded.

My sister has  a sideboard, the door of which was made from a wreck in North Uist. 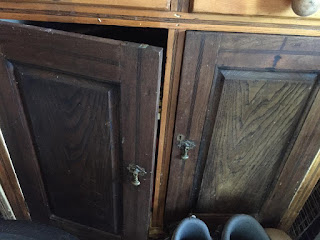 It belonged to my brother in law, Ronald’s family, the MacVicars, who came from North Uist. I asked Ronald if he knew which ship it could have been from. Ronald asked his cousin, Donald MacQuarrie if he knew and he replied:

‘You say that that you have some some sideboard cupboard doors handed down from a Uist wreck. I wonder if the wreck is the one that came ashore on Baleshare in 1877, the James A Wright? When the ship came ashore all the houses in Baleshare, at the time got a share of the booty. I remember there was a green corner cupboard in the family house in Baleshare. It eventually succumbed to woodworm and was burned. Strangely, I have a little bit of wood from a staircase on the wreck that was once in Clachan shop.’ 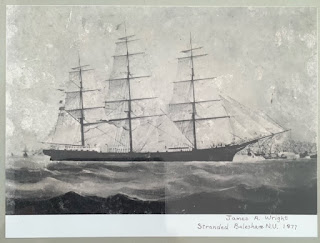 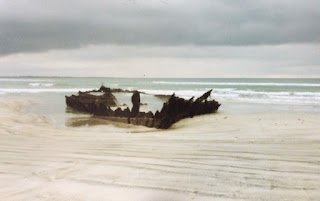 and this is the model of the James A Wright that he made.
The hull is made from a piece of the actual wood (oak) from the boat. 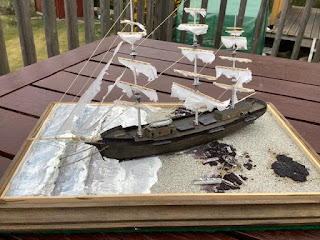 Donald has also compiled local information about other wrecks, including the Ragnhild, the bowsprit of which is in the Westford Inn 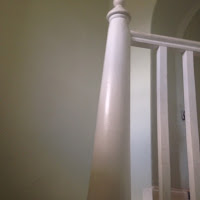 and the Birlin, where a mystery still remains

No local tradition can throw any light on how the boat came to be embedded in the sand, but there is still living in Hacklett, Benbecula an old woman who says that that she heard from her great grandfather or grandfather that a boat of that description had struck the rocks near where it was found.

Two or three women were saved because their skirts filled with air and they were able to get ashore.