As a walker, you become acutely aware of water. It defines the land. Burns fill up in response to weather, becoming animate. After heavy rain, water becomes a visceral force in the landscape. 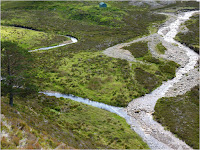 I have been walking and making drawings of rivers and burns for a number of years now.

There is a relationship of both form and life force in rivers, arteries and trees. Alec Finlay coined the term and the form ‘tributrees’. I sought to use this to make an association with the lack of trees  and the abundance of flowing water on these islands.

The Atlantic winds and windswept coasts of the Butt of Lewis are especially hostile to trees but the climate was once more moderate and there is plenty evidence that trees grew in historic and prehistoric times.

A legend tells us why:

It is said that a prince of Lewis forsook a Norse princess and married a native girl. The princess vowed by Odin, Thor, and Frea, and by all the other gods and goddesses of her fathers, to avenge the insult, and she sent her witch to burn the woods of Lewis. The tradition of the burning of these woods is countenanced by the presence of charred trees in peat-moss in many places. It is on record that a Norse prince married a native Barra girl, but whether or not this was the prince of Lewis is uncertain
Alexander Carmichael, Edinburgh, St Michael's Day, 1899


I looked at some of the burns around the Butt of Lewis.

I could not find some names for the smaller burns around the Butt on the OS map but I would like to find out as I suspect they do have locally known names. 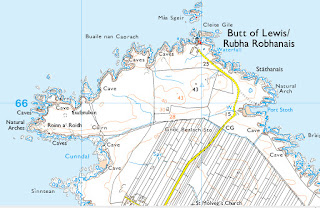 I made drawings of the burns and rivers and produced them in large-scale vinyl. They are arranged in the form of trees – ‘tributrees’– suggesting the arterial life force that runs through this spartan landscape.
In North Uist the land and water seem to merge together in a collage of lochans connected by burns. At Taigh Cearsabhagh the wee burns will be arranged as 'tributrees' on the stairwell wall.