the sound of harris

The Sound of Harris and an interview with Donald MacLean

The Sound of Harris runs between North Uist and South Harris  It is an interesting crossing, and one I have made many times on the Cal Mac ferries.

In ‘A Day Going North’ the first of ‘Five essays into Highland Space’, Murdo MacDonald writes about crossing from Berneray to Leverburgh and his visit to Rodel church.

'As the ferry followed a curving path to avoid skerries and sandbanks, Rodel Church could be seen bright against the flank of Roinebhal.[5] At Taigh Chearsabhagh I had spoken about how so many of us cross the tideline of islands on the ramp of the ferry. Islanders everywhere understand the lifeline necessity and social intimacy of the ferry: few others have a clue about them. I had gone on to suggest that ferry windows always seem to frame something significant.'

'I had shown one of those ferry window views, looking south down the sound of Iona on a choppy day, because that image sums up for me the proximity and distance of islands. The sea – there as anywhere – is an element of easy communication and absolute danger.'

The Sound of Harris is a notoriously treacherous stretch of water with numerous skerries and shoals, making for challenging navigation. 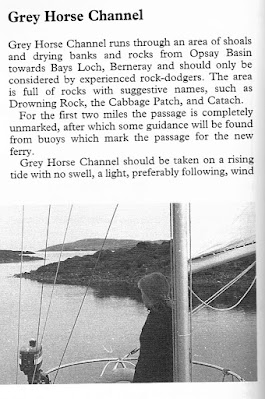 I spoke to Donald MacLean on Zoom.

Donald has lived in Berneray all his life. He grew up in a house that was 8 metres from the high water mark and has been on boats all his days. He worked for 40 years on passenger and cargo ferries in the Sound and is currently employed as a 'motorman' for Cal Mac.

Donald’s sketch of the way through the Grey Horse channel 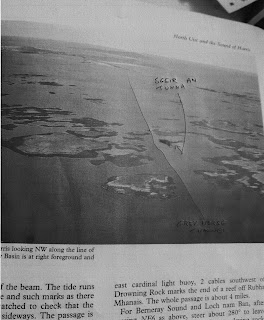 Donald admits to doing a ‘high mileage’ in the Sound of Harris.

Donald MacKillop’s classic study, ‘Sea-names of Berneray’, documents the rocks, islands, shoals and passages in the Sound, along with their stories and folklore. 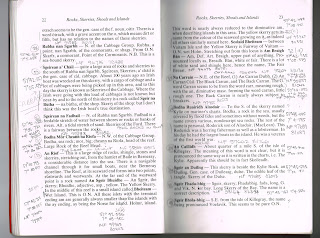 The MacKillop book assumes a living memory that no longer exists, and Chris Tauber has attempted to piece it together. Chris mapped most of the MacKillop names, as best he could, going through the book researching locations, and finding them on OS maps and marine charts.

I created a map from his research-detail below 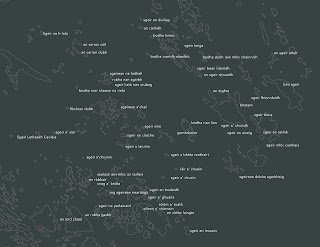 Donald  never refers to the Sound of Harris as such but to different parts of it, for example ‘The Islands’, a group of 10 or so islands belonging to the Berneray crofts for summer grazing and for cutting the peat. He still ferries sheep over to The Islands. 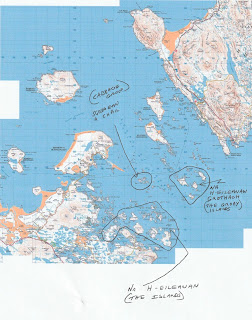 There is a place on the island Killegray named after a shipwreck. There is no trace of the wreck now, but Donald remembers when you could see it. He also talks about the Puritan which was wrecked on Hermetray in 1920 - the crew were saved by local Bereneray fisherman. 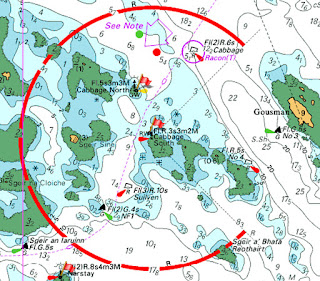 The Cabbage Group, Sgeiran a’ Chail, was named after an incident when a cargo of cabbages from a wrecked boat was washed ashore.

It seems important to hold onto these names.
An extract from Broken Flowers, Alec Finlay’s new book in progress

We chatted about the changes that came with the advent of satellite navigation and precise weather forecasting. Before accurate maps, and well before GPS, we navigated on land and sea using landmarks and memory. It forced a profound connection with the elements and an acute awareness of the rapidly changing dynamic of land, sea, tide and weather.

In 'A Day North', Murdo MacDonald writes about,‘Mùirneag’, a hill in northern Lewis, and a significant landmark for sailors

‘Mùirneag’ means ‘loved one’, but this doesn’t just refer to a boat, it refers to the hill in northern Lewis from which the fishing boat Mùirneag took her name..... When Mùirneag is lost to view you are on your own. Mùirneag is the home hill, out of sight perhaps but always in mind.'

and a Shetland word 'meid', a landmark used by sailors to specify their position at sea.

'A meid is something you line up with another meid, and when the parallax closes them together you know where you are, as long as you are triangulated on another couple of such landmarks. This way you could, for example, locate the position of a fish-rich reef or a safe channel. Thus Mùirneag the hill would itself be used as a meid.'

Donald Maclean talks about a time, thirty or forty years ago, when going out in the Sound of Harris you got to know every rock name. The generation of fisherman going out today don’t need to know the name of any island or rock. It’s the same for the hillwalkers of today who don’t need to know the names of the hills and glens to get to the top of the hill they aspire to climb.

Navigation of the waters of the Sound was done by observing and remembering landmarks-a rock on an island, a telegraph pole, the gable end of a house on the shore.

You learned the names from going out with others.  It took years to learn the landmarks.

The older folk knew what to expect by looking at the sky, reading the weather and knowing how tides and weather interacted.

With the advent of accurate weather forecasting,  we have forgotten how to read  the signs of weather for ourselves.

The convoluted journey of the Loch Portain, is shown on the map below, as it weaves between numerous buoys and navigation aids. There are 22 direction changes over this short passage.

The red line shows the tracking of the ferry journey recorded by Chris Tauber when we crossed the Sound last year. 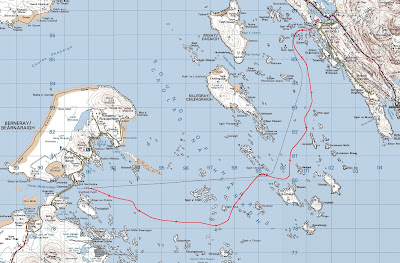 The rocks and shoals are visible from the ferry during daylight hours.  At night, navigation lights are the only guide.

The Loch Portain is not allowed to operate in hours of darkness due to marine safety regulations. All passengers and crew have to be ashore by 3.40pm in the depths of winter.

I created the Loch Portain  mapping ‘schematic’ for night and day. In the white image circle, the names of the rocks, islands, shoals and buoys visible from the ferry are shown.  The black circle shows the navigational aids and their light characteristics. 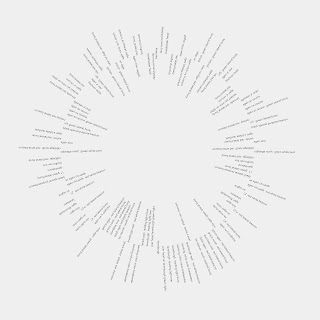 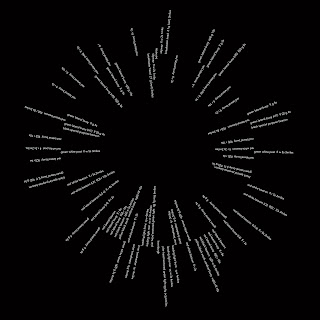 The navigational lights all have a ‘ light characteristic’- the way they flash, which is denoted by a code. 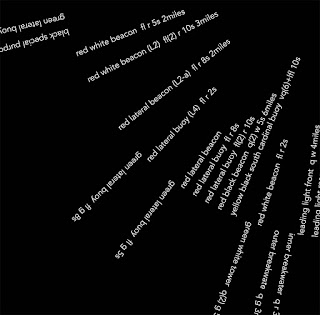 There are many possible combinations-below are just a few examples

Before Cal Mac started the first car ferry in 1996, and before the Berneray causeway was built in 1998, the passenger ferry went a different route. 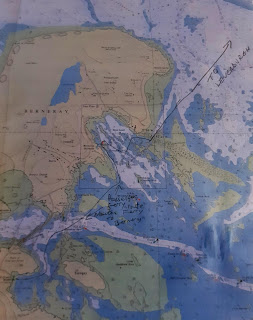 There was a time when they were often on the water at night, as they had to be on call 24 hrs a day for the doctor, police and vet.  And before Donald's time, they frequently crossed the Sound when it was late and dark, sometimes diagonally, from Rodel to Berneray.

Donald said he would not like to do that...even today.

Tides
During low tides there were different routes taken 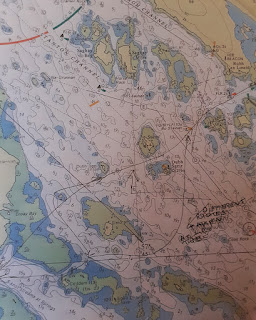 Donald spoke about some strange tidal effects  in the Sound-  a narrow channel reef in Berneray, where   a summer neap tide floods in but at the same time, you see the level on the shore appear to be going down.

In his spare time when he is not working for Cal Mac, Donald likes to go exploring on his sailing boat for a few days.  He says has a lot more places to explore.

The Yachtsman’s Pilot is his Bible.

Broken Flowers: The Quernstones of Loch nam Bràithntean (in progress) by Alec Finlay, is the third volume in a series of cultural responses to renewable energy, island and coastal culture, and the climate change crisis.
Five Essays into Highland Space Murdo Macdonald