'Tidal streams throughout the Sound of Harris are very variable not only between spring and neaps, but also between day and night and between summer and winter' The Yachtsman's Pilot to the Western Isles, Martin Lawrence

I spoke to Donald Maclean about tides in the Sound of Harris. He told me about the care needed in navigating between the numerous rocks, shoals, and skerries and the different routes to be taken at low tide. He talked about the interaction of tides and weather and places with strange tidal anomalies.
Ian Stephen is a writer, artist and storyteller from the Isle of Lewis. He currently works full-time in the arts but before that, he worked for 15 years in the coastguard service based in Stornoway, and has sailed extensively in the Sound of Harris, and way beyond.
A passion for the sea has been a motivating force behind his poems, stories, plays, radio broadcasts and visual arts projects for many years. An extract of his unpublished novel, Sunwise can be read here.
This is his poem:
Sound of Harris
(for Ivor Horton, ex Royal Navy survey-ships and H M Coastguard)

Here, the tides talk in Norse.
They’ll either be for you or against you.
You don’t see the gradient of waters
only collisions with land.

The incoming weight
tries to seep east
scours from Coppay till it gets
the nudge from Ensay.

Berneray to Cheesebay,
it all divides –
midstreams and side issues.
You might find eddies.

Even the Hydrographer
conceded
special treatment
for the Sound of Harris.

The survey was slanted
so all the data
fitted one sheet.
The latitude scale
was orientated
at an angle on the vellum
so you plotted
in diagonals.

But the new edition
is north and south.
The Pentland Firth is the strait that runs between Orkney and the north coast of Scotland (An Caol Arcach, Scottish Gaelic, meaning the Orcadian Strait ). The strait was named 'The Sea of Orcs' making reference to a Pictish tribe who once inhabited Orkney. After Norse occupation it was named Petlandsfjörð, from the old Norse meaning 'the fjord of Pictland'.
It is a hazardous piece of turbulent sea, with one of the most powerful tidal currents in the world, where currents of up 16 knots and waves several meters’ high have been recorded.

Areas where the tidal races are particularly evident have names such as 'The Merry Men of Mey', 'The Duncansby Race’ and 'The Swilkie' (or 'Swelkie')
'fjord of pictland', is a drawing inspired by charts of tidal streams in the Pentland Firth (in the exhibition at An Lanntair only). 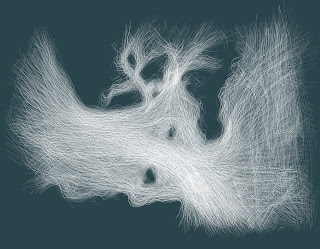 'The Swilkie’ features in Viking legends. It is a particularly violent race with numerous whirlpools. The name comes from the Old Norse, Svalga meaning ‘the swallower’. It was believed that the whirlpool was created by a sea witch who used it to turn the wheels of her mill that ground salt to keep the seas salty.
The strong currents make the Pentland Firth potentially one of the best sites in the world for harnessing tidal power. In his book /blog 'Minmouth' Alec Finlay makes reference to the mytho-poetics of the quernstone as a symbol of the potential for marine energy and how Norse and Norn place-names are an ancient guide to tidal power.
Broken Flowers: The Quernstones of Loch nam Bràithntean (in progress) by Alec Finlay, is the third volume in a series of cultural responses to renewable energy, island and coastal culture, and the climate change crisis.